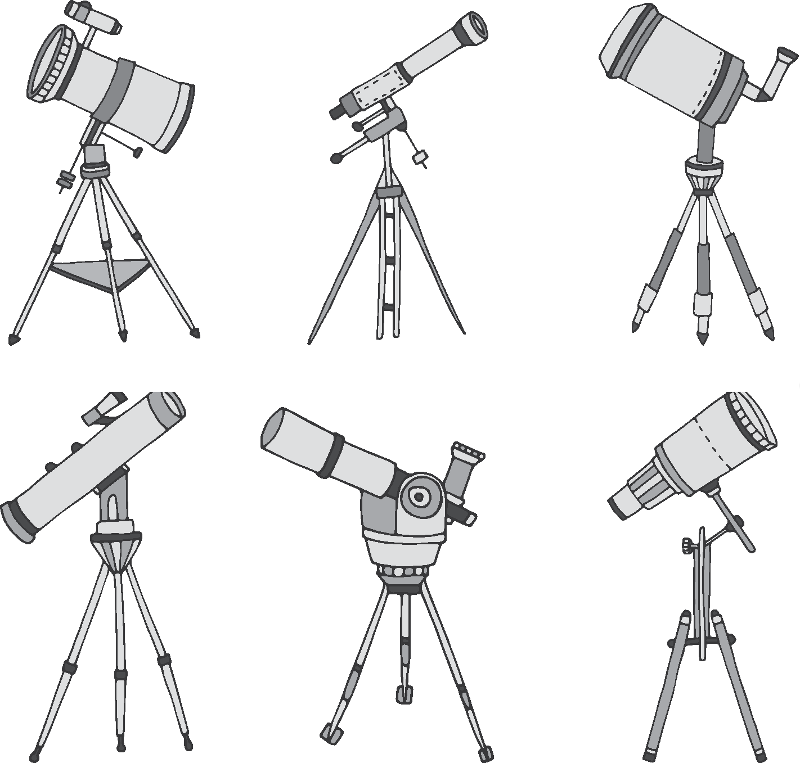 Whether a telescope is large or small, it is one of three types: refractor, reflector or catadioptric, which is also called compound. The catadioptric category includes Schmidt-Cassegrain telescopes. Even though refractors, reflectors and Schmidt-Cassegrains are related historically and technologically, they function differently and have different purposes. They also have different advantages and disadvantages.

A refractor or refracting telescope is a long, closed tube. A simple refractor has only a magnifying eyepiece at its rear and a curved lens at its front. The telescope’s user looks into the eyepiece to see the view that the lens captures. Light rays from objects, including celestial objects such as planets, bend when they pass through the curved lens. That bending forces them to join and form a point on the eyepiece, which enlarges the point’s image. The point is also called the focus and the plane. More advanced refractors have multiple lenses to deal with chromatic aberration, which is distortion caused by colored light rays not creating a single focus. Designs with two lenses are called achromatic refractors, and they reduce the distortion. Models with at least three lenses are apochromatic refractors; their images show no distortion. Each lens has a convex curvature. Refractors have to be long to provide room for focal length, which is the distance between the primary lens at each device’s front and the point at which light rays meet after they pass through that lens.

Hans Lippershey is considered the inventor of the first telescope, a refractor. He applied for a patent for his instrument before two other men, Jacob Metius and Sacharias Janssen, claimed to have invented the telescope. The three men were eyeglass makers. Born in Germany, Lippershey lived in the United Netherlands in 1608 when he created his telescope, which provided three times magnification, or magnifying power. After Italian physicist Galileo Galilei learned about Lippershey’s invention, he created a telescope with a group of lenses that provided 30 times magnification. Johannes Kepler, a German astronomer, also reworked the refractor’s design.

Refractors are used to see moons, planets and binary stars. Compared to the other telescope types, quality modern refractors may offer sharper, higher contrast views, and their lenses’ alignment may be more stable. On the down side, the primary lens’ diameter, or aperture, may not be large enough to capture sufficient light to display moons, planets, nebulae and galaxies that are deep in the sky. Also, some models produce distortions in images. Refractors often cost more than other kinds of telescopes, and their high-quality versions are large, which limits or eliminates their portability. The location of the eyepiece at the telescope end that points toward the ground instead of skyward can make using the device awkward. When the telescope is on a tripod to raise the eyepiece to a height comfortable for people to use, the primary lens may not be able to be pointed toward the sky.

A reflector or reflecting telescope is an open tube, and its eyepiece is on the tube’s side instead of at an end. In place of a lens, the telescope has a large, concave mirror that collects light and focuses it onto a flat mirror, which reflects the light, or image, onto the eyepiece. A Newtonian reflector has an additional mirror that reflects the image to the eyepiece. Cassegrain and Georgian reflectors have slightly different designs. Like refractors, reflectors are long telescopes that accommodate a long focal length.

While working to improve refractors, Isaac Newton invented reflectors. An English natural philosopher and mathematician, he set a plane mirror at a 45-degree angle inside one of the tubes. The angled mirror directed the collected light to the tube’s side, where Newton added an eyepiece. Newtonian reflectors have one open end. The Dobsonian version is a Newtonian on a particular mount that makes pointing the telescope simpler.

Reflectors are used to view stars in galaxies that are in deep sky. Objects appear clear and show contrast because of the telescopes’ large apertures. The images have no distortions. Unlike other telescopes, reflectors provide visually true views instead of mirror images, or reverse views. Some reflectors are small enough and light enough to be portable. Because each one has its eyepiece on its side, reflectors are easier to use than refractors. Considering sizes of apertures, they cost less than other kinds of telescopes. On the down side, reflectors’ mirrors often need to be cleaned because of the tubes’ open-end design. The mirrors also require realignment and recoating.

The catadioptric type of telescope dates to the 1930s, but the origins of catadioptric Schmidt-Cassegrains began about 1672, when Sieur Guillaume Cassegrain created the Cassegrain telescope. The instrument included mirrors, which may have been metal. Cassegrain was a metal founder and sculptor who worked for France’s king. In the 1930s, Bernhard Schmidt created the Schmidt camera, which was also a telescope. Schmidt worked at the Hamburg Observatory. Following Schmidt’s death in the 1930s, developers substituted a spherical mirror for the aspherical corrector plate material Schmidt used in his design. The result was the Schmidt-Cassegrain telescope, which is basically a camera. Then the distance between the secondary mirror and the corrector plate was decreased in the instrument. A decrease in the distance between the corrector plate and the primary mirror followed. The changes created compact Schmidt-Cassegrains.

Schmidt-Cassegrains are used to study moons, planets and binary stars in deep sky. With cameras, they also are used to photograph those objects. They can focus on closer objects than other telescopes, and they are portable and sturdy. On the down side, their lenses and mirrors need adjustment occasionally. When compared to refractors’ views, Schmidt-Cassegrains have one mirror that causes some loss of light in images. Also, their views may seem narrow. When sizes of apertures are considered, they cost more than reflectors. Some people do not like how the compact Schmidt-Cassegrains look compared to the traditional, long tube designs of refractors and reflectors.

The aperture size of a telescope’s primary lens is more important than the telescope’s type or magnifying power. The larger an aperture is, the more light the primary lens can collect and the deeper in the sky it can show objects. Telescopes with very large apertures, however, are not portable. They are housed in observatories.

An eyepiece’s lenses determine a telescope’s magnification. An eyepiece only magnifies the image that the telescope’s primary lens collects. Even an eyepiece with high magnifying power cannot overcome an aperture’s small size or bad atmospheric conditions.